“The story you are about to read is true. The names and faces have been changed to protect the couple’s identity.”

They Found Love at a Citgo Gas Station

At about 11: 00 in the morning, on a hot August day, I received a phone call from a young lady. She very hurriedly and nervously asked me, “Sir, can you perform a marriage?” and then almost afraid to say it, she added, “today?” Even though I already had one wedding ceremony to perform that day, I politely replied that I could. She further explained that I had been recommended to her by a client of mine who is a yacht broker. When I heard “yacht broker” I immediately thought that she and her fiancée had planned a wedding on a yacht and needed my services. But then I thought to myself that if they were getting married on a yacht, or even on one of the many “Dinner Cruise” ships that go around Manhattan, there had to have been a lot of planning involved and surely they would have retained the services of a wedding officiant long BEFORE the day of the ceremony. At this point I was very intrigued and wanted to hear more.

She went on to explain that their marriage license was from New Jersey and she had had a little “accident” with it. It might be torn a little. What she really meant was that she and her fiancée had had an argument, and she had been so mad at him, that she actually started to tear up the license. I told her that if they wanted to get married that day, they had to have a brand new, in tact license. The State of New Jersey will not accept a license with an error, cross out, or even white out on it. I suggested that she call the license bureau and find out if they needed a new one, and if so, could they obtain it that day. She then asked if I would be able to come that day to where they were in New Jersey. I asked where and she replied, “In a gas station.” I could hardly believe my ears, and I asked her again, where were they asking me to marry them? She repeated “Yes, a Citgo gas station.”

For a moment, I thought one of my wacky friends was playing a joke on me. I really didn’t think I was hearing correctly. So I said to her, “I’m performing a ceremony at 3:30 in Central Park for a couple from Scotland. After you get the new, clean, unblemished marriage license and everything is in order, call me back around 4:00 PM and let’s see if you still want me to come out to where you are.”

At 4:05, my cell phone rang, and this time it was the groom on the other end. Almost impatiently he asked, “So, what time do you think you’ll be here?” “Where?” I said. “Here at my gas station in New Jersey. We want to get married and we want you to perform our ceremony so here are the directions. When you get over the George Washington Bridge, take 80 West to exit 64B. Make a left at the light and stop at the first Citgo Gas Station. That’s where we’ll be.”

I thought to myself, hmmmm, no deposit, no emails, no consultations, nothing in writing, just a phone call from two people that really didn’t sound too convincing. But what the heck, it’s only a 45 minute drive from where I was, the weather was warm but beautiful, a nice day for a drive, and I would find out if this was for real.

So I began my journey into the “twilight zone.” As I left Central Park and began my drive through Manhattan to New Jersey my curiosity about this couple was growing. I couldn’t decide if they were some exotic, way out couple or just a couple in love, willing to do anything to get married as quickly as possible.

When I arrived at the gas station I asked the first person I saw, I think he was a mechanic “So, who’s getting married?” He looked at me rather strangely, as if to say “Who gets married in a gas station?” But he asked someone else there a few questions in another language, and then directed me to a small office and that is where I saw Minnie for the first time. She was sitting on the floor with her back against the wall and her arms wrapped around her knees pulled up to her chin, looking at me with sad eyes, but yet with warmth and a certain beauty that only a bride usually radiates. I asked, “Is it you that’s getting married?” She replied yes by nodding her head. 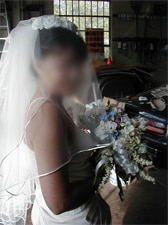 “And where is the groom, your fiancé?” I asked. At that she pointed to Mickey who was standing by a gas pump saying goodbye to a customer. I then asked where they would like me to perform the ceremony and she pointed to the garage next to the office. She asked me if she could wear the veil that she bought and she also said she wanted to get the flowers she had bought for the occasion. I told her that of course she should wear her veil and get her flowers. What kind of bride would she be without a veil and flowers?? On that note she ran out of the office to an SUV that was parked outside. She prettied herself up with some lipstick, a little make-up, brushed her hair and placed the veil on her head. She began to look like a real bride. Wanting to create a softer, more romantic atmosphere, she had brought a candle to light during the ceremony. Her flowers were artificial, but her love and passion were as real as could be. 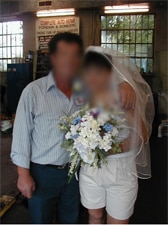 She called out to Mickey, “C’mon, it’s time; you can’t keep the Captain waiting, pull down the garage door and let’s get started.” There was no champagne to make a toast, no guests, no reception, no food or music. There was just the heavy odor of grease, oil and gas on a hot humid day in August. Then I thought about that candle she wanted to light. With the smell of gas all around us, it might be the last ceremony I’ll perform if she lights that candle so I told her to hold off until after the ceremony is finished and we open the garage door. The air was so thick you could cut it with a knife. The only people there were Minnie and Mickey, me and their mechanic as a witness and one passerby from Florida who had stopped to buy some gas.

As I stood there watching Minnie getting ready for her wedding, I thought to myself, this is probably the most important day of her life and while it was a far cry from what weddings are usually like, at that moment in time, they seemed to be the happiest couple in the world. She told me that they had gotten their license just the day before, and did not want to wait to get married.

They were perfectly happy having their ceremony at the Citgo gas station, on the highway in New Jersey – she in a pretty little veil, wearing white shorts and white tank top, he in his gas station work shirt with the Citgo logo on it.

So, there we were at the gas station, next to a grease pit, automotive parts, used and flat tires and hub caps and tools all over the place and a broken down old car in the garage that they must have taken apart for parts. “Do you have the rings?” I asked. “Rings…” they echoed. Uh oh! I guess we need some rings. 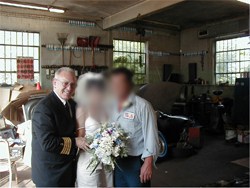 So, luckily I found some old rusted washers (I took them off some nuts and bolts) and that became their wedding rings, just for the moment. After all, it was just for symbolic purposes. I told them that later on they could buy real rings and throw away the washers.

Although, who would throw away washers that they got married in??

As they said their vows, Minnie cried. The tears were rolling down her cheeks. He smiled and held her cheek in his hands and wiped away the tears. At the conclusion of the ceremony, Minnie and Mickey kissed like all couples do when they hear the words “I now pronounce you husband and wife.” Within minutes after finishing the ceremony and kissing his bride, Mickey left to pump gas into the next car that pulled up.

So, there I left them – two people in love. Him watching the gas pump meter ticking away at $2.53 a gallon and she standing at the cash register waiting for the money. She removed her veil and wiped away some of her tears. She wanted to give me the flowers she had carried, but I said no. She asked me if I needed some gas, but again, I said no. I had filled up earlier.

As I pulled out of the station on my way back to New York, I thought to myself, this one was really a gas! Definitely one for the books, or in my case, the “Unique and Unusual” page of my website. But you know what? I felt really good about this one, even as I was sitting in bumper to bumper traffic at the George Washington Bridge on my way home. I know one thing for sure, the next time I pull into a Citgo gas station and say fill-er-up, I’ll always think of Minnie and Mickey.