IT JUST HAD TO BE ON THE QUEEN MARY II 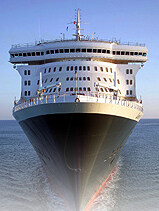 I love this little story and I think you will too. Pat and Jim contacted me early in May and told me that they would like to get married on the Queen Mary II, a cruise ship that today is considered one of the world’s greatest cruise ships afloat. Pat’s mom is 88 years old and still in good health. Not knowing how long she would be that way, they decided to treat her to a cruise on the QM-2 while the ship would be in the New York harbor over the July 4th weekend. Pat and Jim were engaged for about a year, but had to postpone their wedding several times due to her mom’s ill health. Now, things looked promising and as Pat put it, hopefully they could get their license and set things in motion to make this very special day of theirs happen on the QM-2. There was only one problem that seemed to hinder their plans. I already had three weddings scheduled to perform that day, and this would be the fourth. My concern was, would there be time enough to allow me to do it. Lady luck was with them, and I guess with me too. I was available.

But more problems arose. Pat and Jim contacted Cunard Lines to get permission for me to come aboard the ship to perform the ceremony. However, due to very tight security after 9/11, especially on cruise ships such as the QM-2, they persistently refused Pat and Jim’s requests. So, a change of plans was put into motion. They decided to get married July 1st at the “Water Club” in Manhattan, or the “River Café” in Brooklyn followed by a dinner celebration.

But I could tell from talking to Pat, and by some of the things she wrote in her emails to me, that she and Jim still had their hearts set on getting married on the QM-2, with her mom present to see her get married in what could only be called a “fairy tale” event.

So, they rekindled their search for a way, or a loophole, to get me on the ship to perform the ceremony. Pat emailed me and asked if I would contact the ship directly. Perhaps as one Captain to another, and with all my credentials, I could convince him to let me perform the ceremony. Days were passing quickly and we really had to move, so I was about to start making some inquiries of my own to find a person who had the authority to allow an exception to their rules. 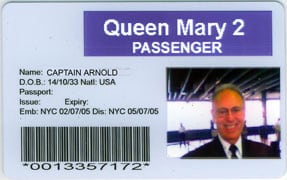 Before I reached anyone, I heard from Pat with their new idea. She said: “Everywhere I looked last night on the boarding papers and on their website it emphatically said that non-paying guests were not allowed on the ship for security reasons. I woke up with a wonderful idea,” she said. “LET’S MAKE YOU A PAID PASSENGER!” And on that note, they bought me a passenger ticket. With that ticket, I would be able to board the ship, perform their ceremony, and even take the cruise if I so desired. When I asked Pat what I should do with the ticket, she said just keep it as a memento. 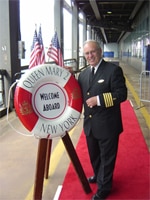 And so the wheels were in motion for me to be able to board the QM-2 to perform their ceremony. I would be given the QM-2 special ID card giving me “open gangway” to move about the ship with no restrictions. I met with Pat and Jim a few weeks before the wedding day and received the very impressive leather pouch embossed with the QM-2 insignia with my passenger ticket enclosed. 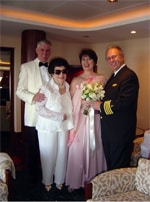 Their wedding day came and we planned to meet at about 2:00 PM in the Commodore Club on the deck that their stateroom was on. When I arrived at the ship around 12:45 pm, I was astonished to see what looked like thousands of people waiting on a very long line to board the ship. I thought to myself, Hmmmm I’m a Captain, so why not do what Captain’s do, and I walked right to the front of the line, showed security and crew my ID card and they even acknowledged me with a snappy salute and a “welcome aboard Captain.” I got into an elevator, went up to Deck 9 and waited in the Club.

For the rest of the story, see their note to me, especially the post script.

I would have loved to have gone on that cruise, on one of the world’s greatest cruise ships, but duty called and I still had two more couples waiting for me, looking forward to their own fairy tale weddings.

Bon voyage Pat and Jim and Mom. I’ll sure remember this one!! 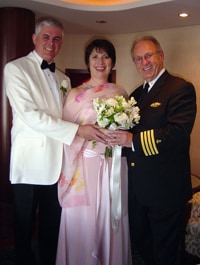 We just got off the QM2 and immediately wanted to write and thank you for making our much anticipated wedding day so wonderful. We thought a spectacular ship like the Queen Mary II would be romantic and special, but you made it even more so. Your selection of the room, complete with fireplace, had a wonderful intimacy. Your words were heartfelt and our vows made everyone misty eyed. Thank you for paying special attention to my mom, who kept saying how wonderful you were.

And thank you so much for arranging for our cabin steward, Karen, to take our pictures after the ceremony. You can tell how blissful we were on our wedding day with each picture better than the next.

P.S. By the way, the ship called mom before disembarkation looking for you. We told them you had an emergency and could not come back on for the voyage!