A Black Friday Wedding on the “N” Train 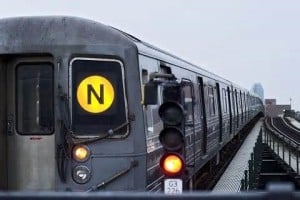 Just when you think you’ve seen and done it all, there’s always one more thing left to surprise you!

It was Tuesday, November 25th, 2014, mid-afternoon when my office phone rang. On the other end, Hector, the future groom of the story, simply asked, “I know that it’s short notice Captain, but are you available to perform your wedding ceremony for us this Friday?”

“Hmm,” I thought to myself, “I hope he’s not looking for a Black Friday discount!” I told him to hold on while I checked my calendar. “Sure, I’m available,” I replied. “Where is the wedding taking place? Can you give me some more details?”

“Great. Put the speaker phone on so you both can hear me. I’ll tell you some more about me and some important details about my ceremony. If you like what you hear and see on my website, I’ll take you to the next step. Does that sound good to you?” They answered enthusiastically in the affirmative.

“Then,” I added, “due to the short time frame we have until your wedding day, we really have to move fast. Can you tell me about the logistics for the wedding and how you planned it out? It is, after all, very unusual and sounds like it will be a very special event, to say the least?” 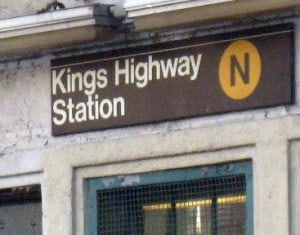 kingst highway station Hector then revealed his plan and was very confident that it would all work out according to the schedule he laid out to me. “I plan to get on the train at the King’s Highway subway station in Brooklyn. I’ll have my mom and dad with me together with about 20-30 of our friends. We’ll decorate the first subway car the best we can with some wedding bells and some fancy paper to dress the train up a little for a wedding.”

“Tatyana, my bride, will be getting on the train at the 36th Street station and the ceremony will begin as soon as she gets on the train. We won’t have too much time from when I get on until she gets on, so I know we’ll have to move very fast to prepare the train for the wedding.”

“What’s really most important,” he added, “is that we want the ring ceremony performed just as we are going over the Manhattan Bridge. We’ll all exit at the Canal Street station in New York and from there, we’ll all walk to a bar that a friend of ours works and where we’ll continue to celebrate our wedding.”

“It seems you have this all planned out, but did you get this cleared and approved by the MTA?”
“Yes,” he replied.
I then questioned him as to how he planned to deal with the regular train passengers that would be getting on the train or, for that matter, those that were already there. After all, he didn’t rent a private train car so there were bound to be strangers getting on and off the train while the wedding was taking place. His reply was, once again, simple.

“We’ll have our people at all the doors to tell passengers that are getting on that a wedding is going to take place. We’ll also hand them a rose and ask if they wouldn’t mind moving to another car or to the back of the car that we’re in. This way, we can at least leave the front of the car fairly empty where the wedding will be.”

I was beginning to think this might be some newsworthy material for some members of the press. I asked Hector if he wouldn’t mind if I contacted some of the news media to tell them about this wedding on the “N” train. He had no problem with it, so I made a few calls and stirred up some interest from the New York Daily News, and Channel 7 TV. Both expressed interest and said they would follow up on it.

Preparations began and I emailed Hector and Tatyana my wedding checklist that would give me all the personal information I needed to prepare their ceremony. Some phone calls were exchanged, logistics and details were reviewed and all was in place for what later proved to be a fantastic day for everyone involved in the first wedding ever on the “N” Subway Train. 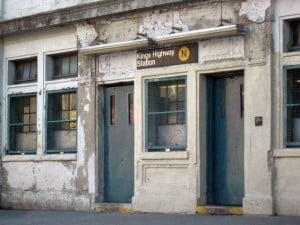 Black Friday arrived and I left my home early in anticipation of heavy traffic conditions. I was right; it seemed that everyone was out of their homes and into their cars doing their Black Friday shopping for those wild discounts.

I arrived about 15 minutes early and parked my car right in front of the King’s Highway Station, which looked like a very old building that needed some heavy duty face lifting. We were all to meet at 3:15 PM. We were to board the 3:35 PM train and meet the bride, who would be all set to board at the 36th Street station. We would therefore have about 15-20 minutes prior to picking up the bride. Everyone who was supposed to be there showed up a few minutes earlier, including the Daily News reporter and her photographer.

We were all right on schedule and as we pulled into each station prior to arriving at 36th Street, I was amazed to see how cooperative so many passengers were when asked to move to another car or to the back of the car we were in.

Some were shocked when they were about to enter the train and were approached at the door by a total stranger, flowers in hand. After they were given a quick explanation as to what was happening, some moved back from entering the train, some waited for another train and some came in, took a flower, and moved to the back.
This was some incredible crowd control, especially on a moving subway train where you only have seconds to make a decision before the doors close.

Everyone was soon busy decorating, hanging wedding bells, colorful paper wrapped around poles, and the hanging straps you hold on to when you’re standing on a moving train. While that was happening, Hector explained to all the passengers that he was getting married and that his bride would be arriving any minute. He also thanked everyone for understanding and offered a flower to those that didn’t receive one as a token of his gratitude, a nice gesture that I know everyone appreciated.

I braced myself against the wall at the very front of the train car and waited. This would be the spot where the ceremony would take place. “Whew!” I thought, “What pressure!” 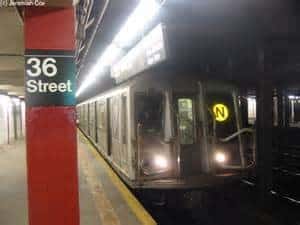 But everything was going just fine and our timing was perfect. The decorations were done, and it certainly looked like a wedding train. All we needed now was the bride!

The train finally pulled into the 36th Street station and there she was! Tatyana and her bridesmaid boarded at the other end of the car and Tatyana walked down the aisle toward Hector, flanked by friends, family and train passengers. She was a strikingly pretty, blue-eyed blond girl from the Ukraine, where all of her family lives.

She reached out for Hector’s hand to steady herself and they both stood before me, bracing themselves and holding on to a pole that stood between them. 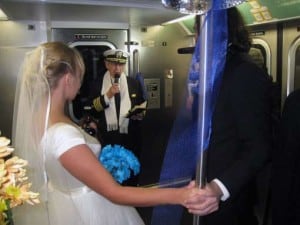 Without missing a beat, the ceremony began. I became acutely aware that time was of the essence. I had to move along as fast as possible, but I still wanted my words to be felt and not have this turn into a circus instead of a heartfelt wedding ceremony.

Even though the noise of the train tracks were beneath our feet and the distraction of a moving train was all around us, when I had Hector and Tatyana repeat their vows to each other, it was then that I saw tears stream from their eyes and knew that my ceremony had hit home. I looked around and saw many of their friends and family wiping their eyes at a moment that was very emotional.

The best man signaled to me that we were approaching the Manhattan Bridge and it was time for the ring ceremony. Rings where exchanged at the exact location they wanted and more tears were shed. Just as the train started pulling into the Canal Street station, it was time to declare them husband and wife. “Hector,” I then said, “you may kiss your bride for as long as you want!” 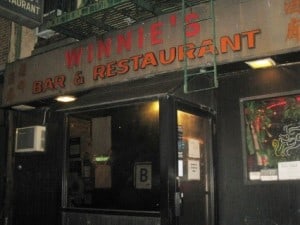 The happy couple kissed to thunderous applause from everyone on the train, so loud that you couldn’t even hear the tracks and the screeching sounds of the train. The only other thing you heard was the sound of the conductor’s voice coming from the speakers, saying, “Canal Street”. It was a magical moment, and you could feel the love and excitement that filled that train car.

Now it was time for us all to get off the train as it was the last stop for the wedding party. Some photos were taken at the Canal Street station and a quick walk took us to their friend’s bar, “Winnie’s” where the remainder of the celebration most likely continued into the wee hours of the morning.

The Daily News had a nice little story the following day in their Saturday edition with a headline “N is for Nuptials”. 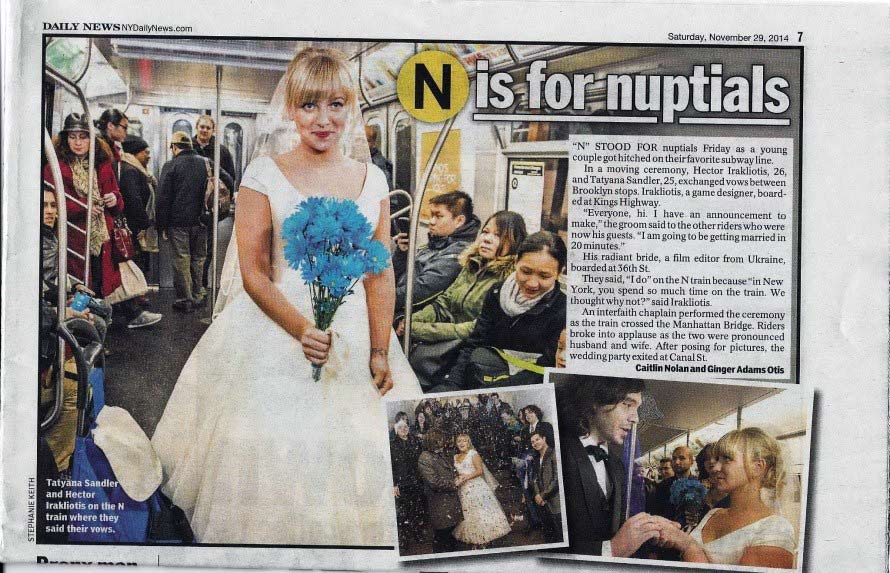 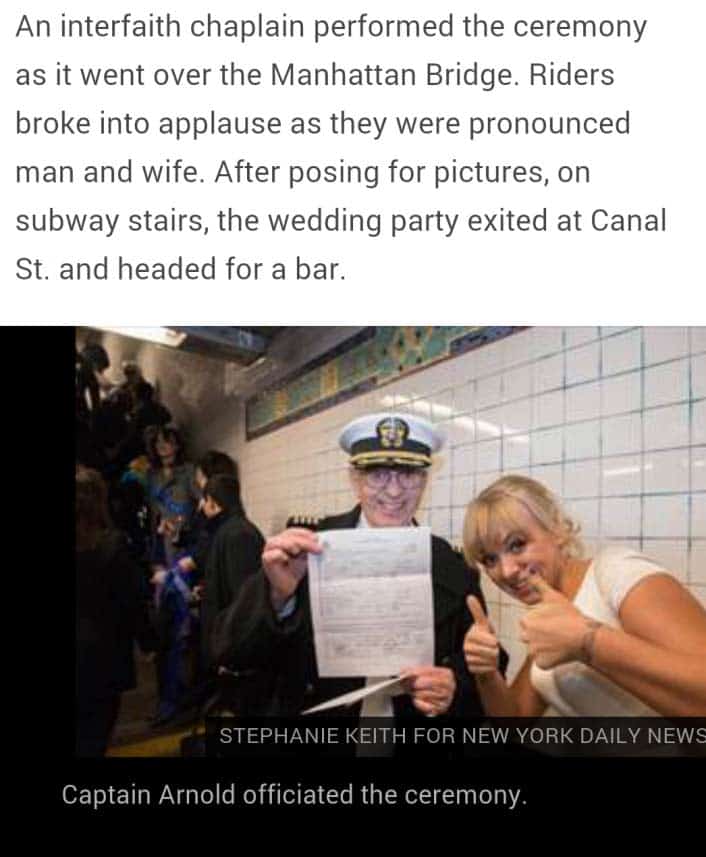 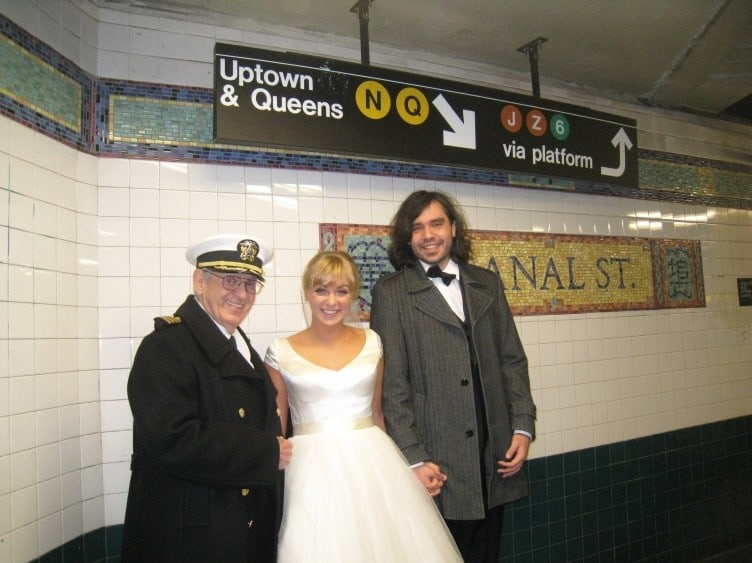 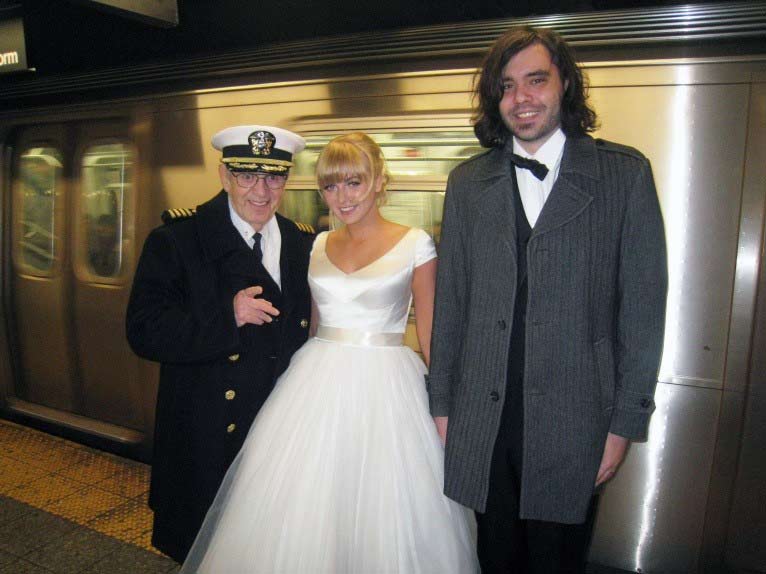